On Monday 1st June, the beginning of Week 11 of Lockdown (now Lockdown Easing), we celebrated my mother-in-law's 89th birthday. A zoom call was organized with her ever kind and supportive neighbours handing their iPad over the garden fence which she laboriously takes upstairs and into her study to share her neighbours' wifi signal. We pray she won't trip, or touch the iPad in some way to change the settings or break the connection (all of which have happened over the course of this Lockdown!). If she makes it, we breathe a collective sigh of relief. We sometimes see nothing but a pink screen as she puts her thumb over the camera, clinging to the iPad for dear life.  Simultaneous shouts of  'Mum! take your thumb off the camera!' I'm still not sure she knows where the camera is located but she usually does enough to restore a picture - even if it is looking up her nose. On several occasions we've had to try and talk her through what she's done to make us disappear off the screen and when that's failed we've had to telephone the neighbours and start the whole process all over again! Ah yes, we have all had these 'technology with old people' experiences in Lockdown, haven't we? But my goodness, haven't they been great at embracing it? It has been such a life-saver and has given us a sense of connection however many miles or oceans we are apart.

What a difference a year makes. Last June, as a combined celebration of three birthdays - my mother in law's, my own and my mother's - we had spent a divine day at Gravetye Manor in West Sussex, close to their homes. It began with a happy hour meandering around the glorious William Robinson gardens on the most sublime, hot June day, before sitting down under a parasol in the garden to enjoy a glass of fizz while perusing a menu bursting with invention and seasonal temptation. The food, and the new architectural glass extension in which it was served, did not disappoint. I would recommend it to anyone.

Maybe with that wonderful day in mind, I declared grandly that for my birthday, a week after my mother-in-law's, I would like 'to visit a garden and see the sea'. Having always wanted to witness the topiary and herbaceous borders (a particular love of mine) at Arley Hall, I was delighted to find that they had re-opened on 29th May and were open 7 days a week. Result! A Monday birthday is a difficult one in 'normal' times with so much shut after the frenzy of the weekend, so this was an added bonus. Formby is probably one of the closest half-decent stretches of coastline reasonably accessible to the High Peak (Wales being closed to visitors at the time), so that was the obvious next stop. A picnic was planned on the dunes and a reasonably early start required so we could get back and cook our steak supper - no pubs or restaurants open of course.

We aimed to leave at 10am. We left at 12 noon. Anyone who knows us will not be surprised. I was treated to a lovely breakfast in bed - French toast which was the perfect accompaniment to a French magazine I had coincidently picked up to read. After a leisurely shower, I came down to find a kitchen decorated with balloons and flowers and gifts which I admired while we prepared our picnic. And then we were off! It was like the Famous Five go adventuring (except we were four - E was back in Newcastle) - after all these weeks of incarceration it was actively exciting to get in the car and GO SOMEWHERE!! (other than the local supermarket). I would never have believed that going down the A6 to Stockport could be so thrilling...!

Pulling into the car park at Arley Hall, we were far from the only visitors. It was reassuring to see that others were out and about, with the appropriate social distancing in force, despite all the fear around the virus, enjoying life's gifts. For me, that really is the point: we can all find joy in such small things, especially when we have been deprived them. Suddenly their real value in our lives becomes clear: friendship, family, pets, gardens, a hug, good food prepared by someone else... Simple things, simple pleasures.

The member of staff who greeted us outside the (closed) gift shop, was so wonderfully welcoming: wearing gloves and a huge smile, at the appropriate distance, she informed us about the garden and its facilities and then that was it - freedom to roam, to smell, to see and to enjoy.

We wandered first through the wild garden walk (rhododendrons and azaleas sadly now mostly over) and then back through the cafe in a beautifully high-vaulted building where we were able to get a glass of rather good sauvignon blanc and an irresistible hand-hewn tuna sandwich of style and substance (which we shared, conscious we still had our small picnic) all served up, once more, by delightful staff. What more could a girl want? Seating was outside, at socially distanced tables, or in an open-ended part of the magnificent Tudor barn for inclement weather.

From lunch to the scented garden, the walled kitchen and formal garden, the famous herbaceous border walk with its complementary topiary, the long walk with its parkland vista, the cottage garden and the rootery. Lots of photographs taken and the whole lovely experience topped off with a visit to the nursery to buy some souvenir plants. The sun even came out. Roses bloomed, vegetables burgeoned, the warm June air was full of promise... 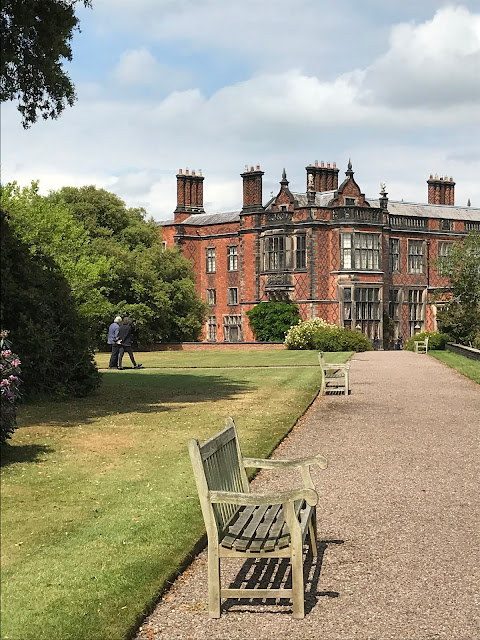 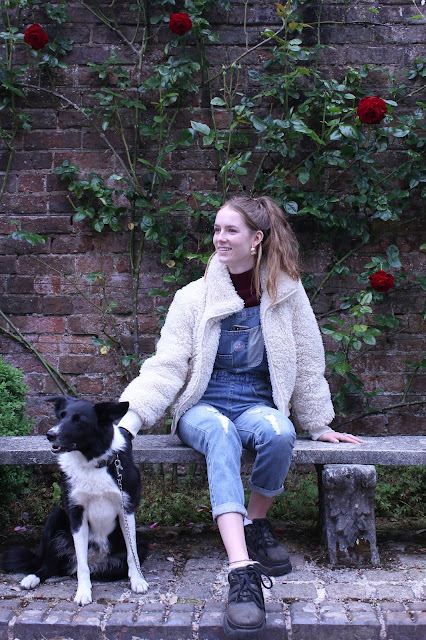 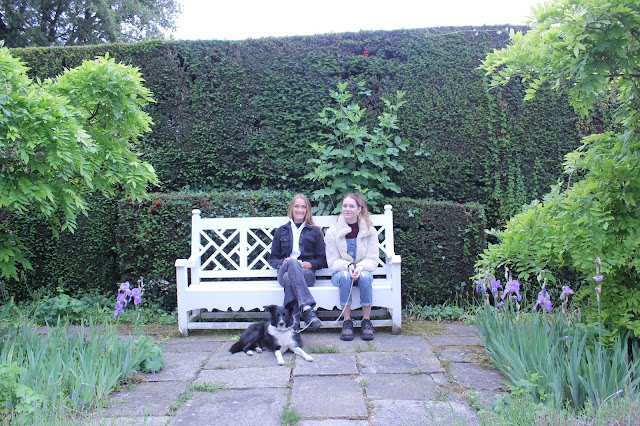 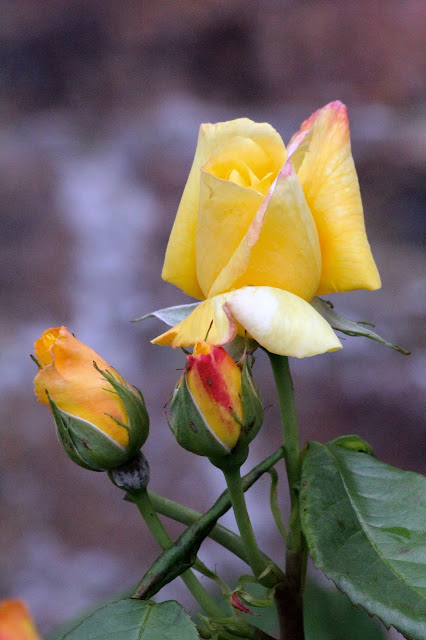 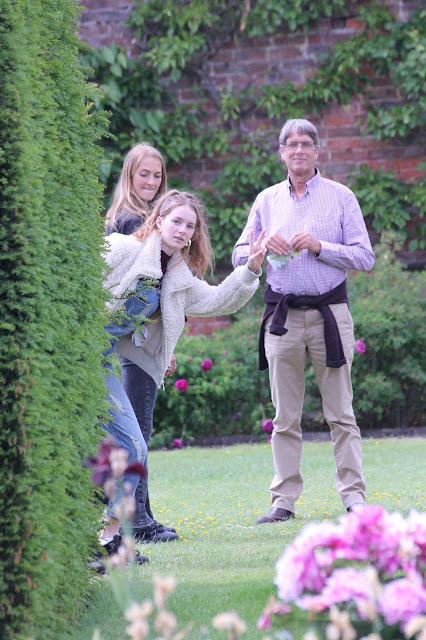 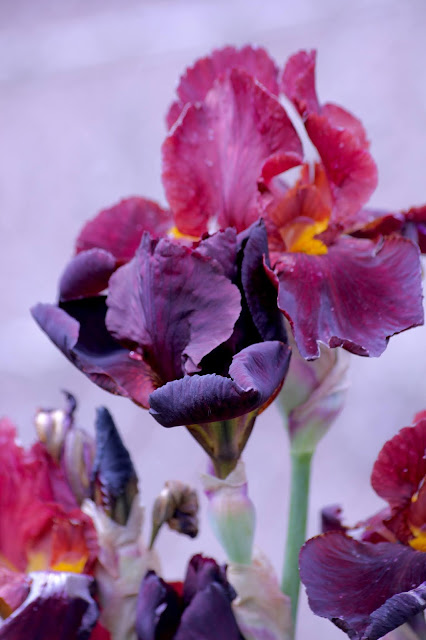 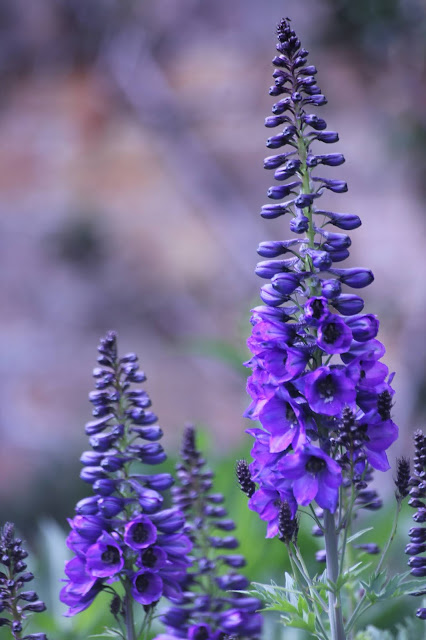 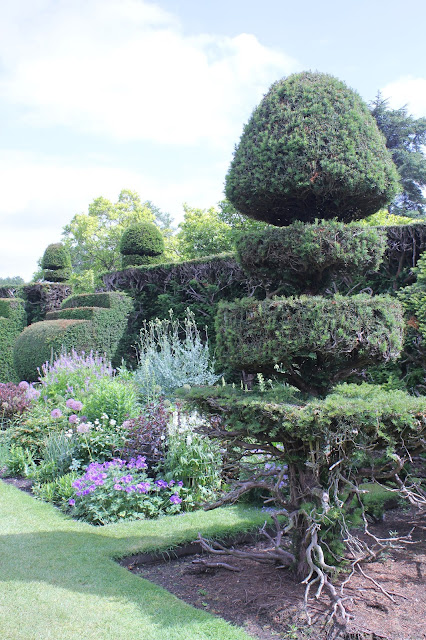 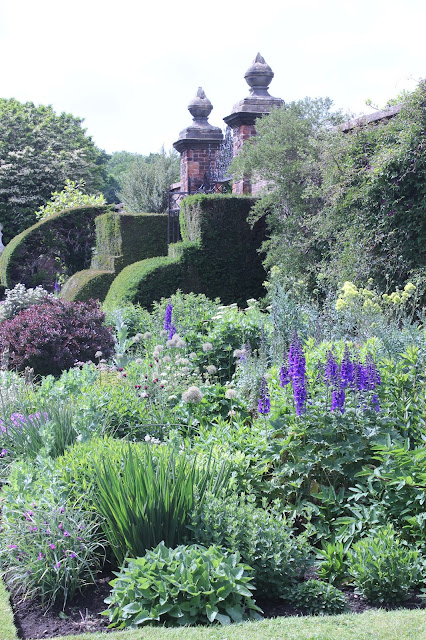 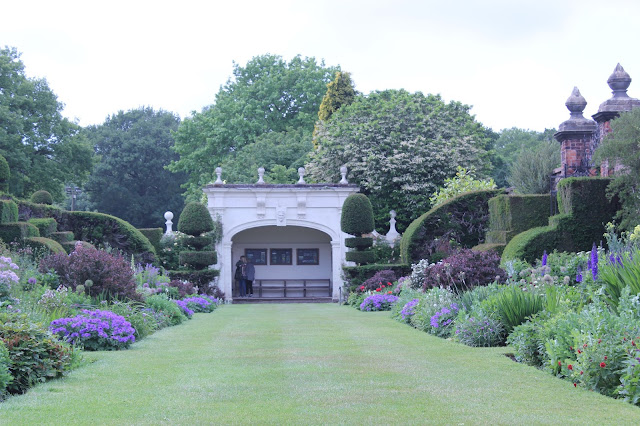 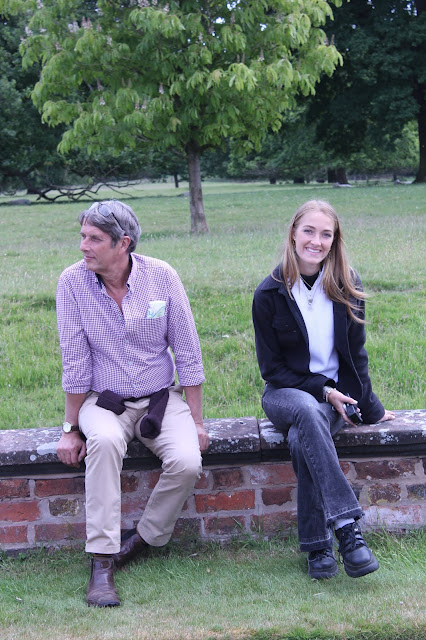 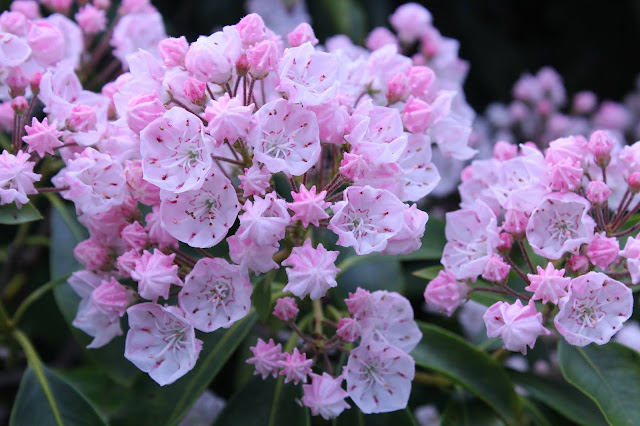 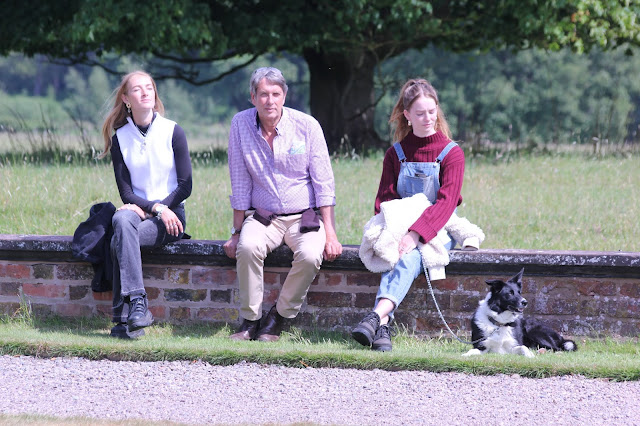 And so to 'Another Place' - literally and figuratively. Having been inspired by his exhibition at the Royal Academy last Autumn, we decided to pop by and look at Antony Gormley's famous installation of 100 life-size cast iron figures gazing out to sea on the wide, flat expanses of Crosby beach, just south of Formby. In the late afternoon haze they were solid yet ethereal, staring sightlessly out onto a once bare horizon now adorned with a monumental wind farm, adding an unforeseen focus to their gaze: art and science meeting unexpectedly, each a monumental work, each strangely enhancing and complementing the other's beauty and impact. A flock of starlings swooped along the distant sands, low to the ground, their murmuration morphing and undulating with the light and the landscape. A boat chugged noiselessly between the turbines, unwittingly emphasizing their stature and stationary solidity. A lone cockle-picker was hunched minutely on the far wet expanses, his dog dancing by his side, the tide threatening to trick him into a sense of security even as it snaked around the muddy, treacherous sands. The life-guards packed up their watch, the ice-cream van handed out 99s. A snapshot of life beyond Covid-19. 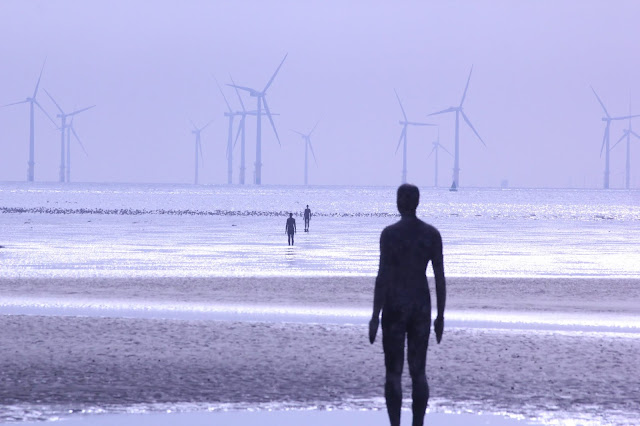 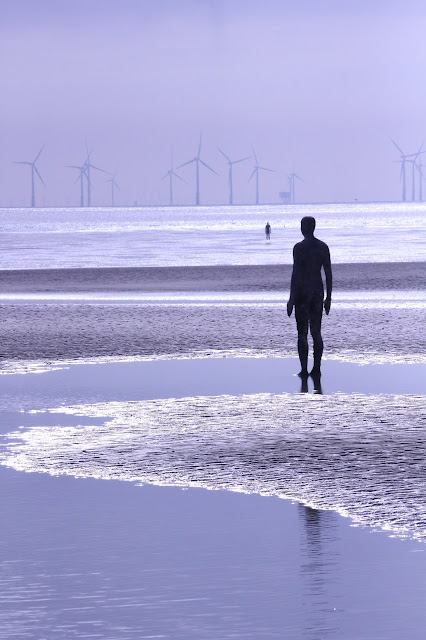 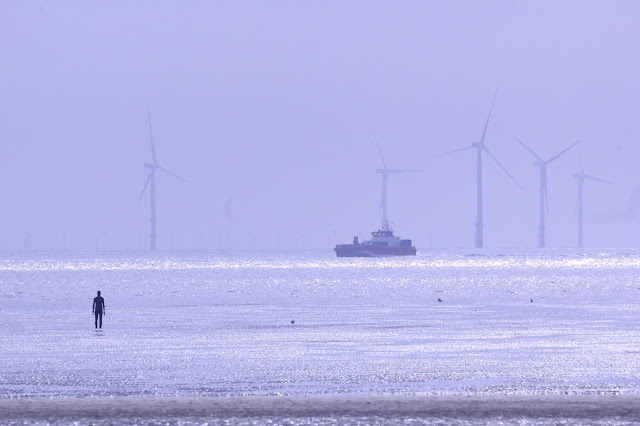 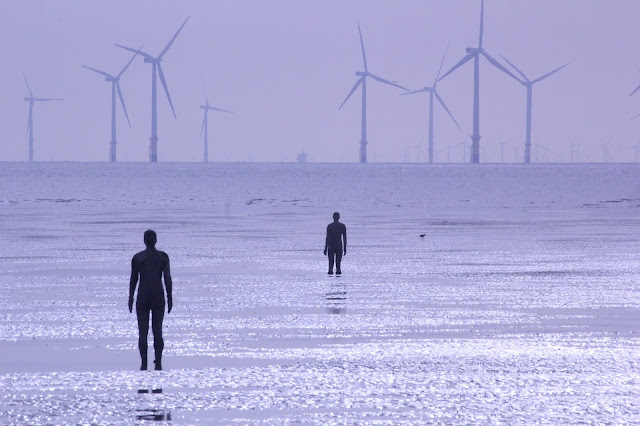 From here to Formby Point - a National Trust owned stretch of coastline of naturally formed high dunes and extensive pine forests in which red squirrels frolic in the safety of the sanctuary. As the sun dipped towards the horizon through threatening leaden clouds, we lay down our picnic rug and popped open the prosecco, raising a glass to life. The sun rises, the sun sets, all the rest is just noise. It rises on the day of your birth, it sets on the day of your death. Everything in between is a gift. 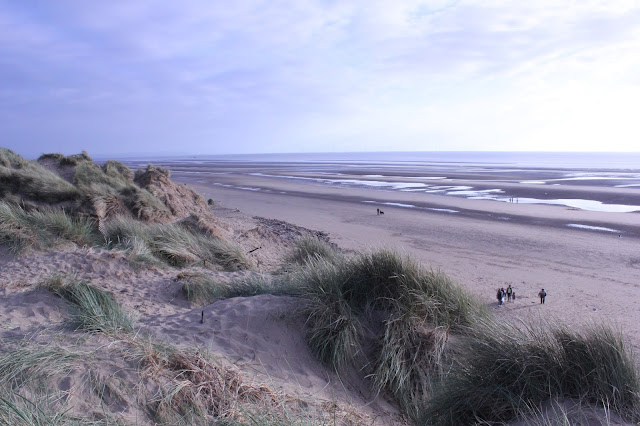 As Colston's statue was thrown into the water in Bristol, so Covid-19 was toppled off the news headlines for the first time in nearly three months. The Black Lives Matter movement was finally brought fully to the world's attention in a desperately unfortunate way through the death of George Floyd. The girls committed to informing themselves as their generation woke up to the world's shameful inequalities. Black lives matter. All lives matter. It should not be down to the colour of your skin.

Linda said…
What a beautiful way to celebrate LIFE! Happy Birthday from Texas!
I loved reading every word and seeing every photo!
Sunday, 28 June, 2020 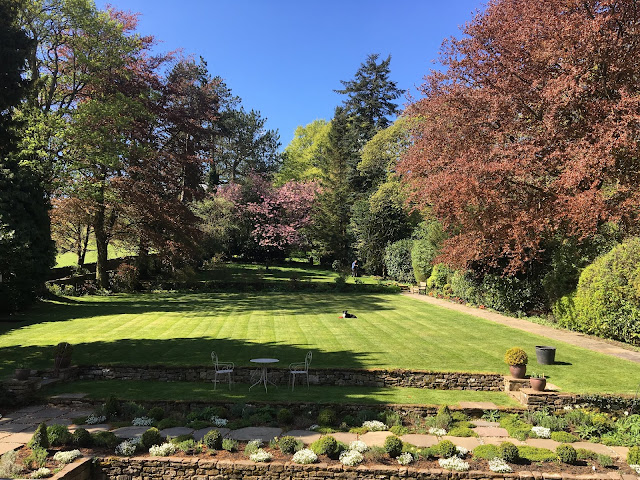